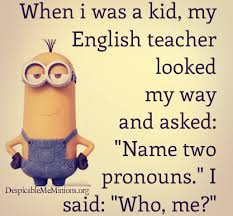 Welcome to another, You Asked, the Experts Answer, segment. This week ‘s question is: How can I stop overusing pronouns?

Pronouns: a word that can functions by itself as a noun/phrase and refers either to participants (e.g., I, you) or to someone or something mentioned elsewhere in the discourse.”

Words such as I, he, she, you, it, we, or they are examples of pronouns used instead of a noun or noun phrase.

We overuse pronouns because we get attached to a character or the name is often easier. I can relate to this problem. However, easy doesn’t always translate to better writing.

“Norma crept by the sofa where Adam had passed out after Adam’s little welcome home. The kitchen looked like one of those Norma had seen on TV after a tornado. Norma opened the cabinet, pulled out a trash bag, and began picking up the scattered groceries.”

I tend to write like I talk and as a result, overuse pronouns especially in the draft stage. But, there is a method to the madness and used correctly, pronouns will enhance your writing. The paragraph above reads like someone in love with the name Norma or had an aversion to pronouns.

Tweet: “Pronouns are those clever little inventions that allow us to replace nouns and avoid clunky repetition.” K.M. Weiland

“Norma crept by the sofa where Adam had passed out after his little welcome home. The kitchen looked like one of those she had seen on TV after a tornado. She opened the cabinet, pulled out a trash bag, and began picking up the scattered groceries.”

Repeating the characters names, once introduced isn’t necessary. We understand Norma is the “she” picking up groceries and “his” refers to Adam.

When to Use Pronouns:

Tweet: “Ensure your pronouns have an unambiguous antecedent that is both before and near each pronoun.” Grammar Girl

No matter what your grammar sin may be, get your story down first. The revision stage and a good editor will help you make the necessary corrections. Below you’ll find a wealth of knowledge from the experts.

What about you? I’d love to hear your comments. Talk to me. Tell me your story and look for me on Facebook at SheilaMGood,  Pinterest,  Bloglovin, Twitter@sheilagood, and Contently.

5 thoughts on “You Asked: How To Stop Overusing Pronouns”