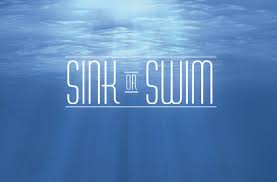 You’ve heard the adage, sink or swim. It’s a phrase often shared when one is facing something difficult, be it a choice, future, task, or survival. When we find ourselves with little recourse in life, sometimes all we have left is to take a leap of faith.

Sink or swim is a simple, to the point, and powerful statement. It offers only two choices – success or failure. It’s also an affirmation of what each of us is capable of doing.

I left home before the age of eighteen under difficult circumstances, moved to the city, thirty minutes from my home, and rented a one-room apartment. My apartment, situated on the top floor, consisted of a bedroom, unheated kitchen (unless you counted the oven) and a shared bathroom across the hall in an old, rundown house. Located in a “bad” section of town it was, thankfully, close to city transportation.

At seventeen, in school with only a part-time job, I was on my own, and anything after that was my doing. I could either wither under the pressure, let fear paralyze me, or soar under the wings of freedom. I could either sink or swim. I chose the latter.

I learned about public transportation, memorized the bus schedule, and discovered the power underneath my legs. If the bus didn’t go in my direction, my legs did. I penny-pinched and learned the value of a dollar. I studied hard, made friends, and fought back the fear of unchartered territory with determination and confidence I didn’t feel until much later.

Eleanor Roosevelt said, “We gain strength, and courage, and confidence by each experience in which we really stop to look fear in the face… we must do that which we think we cannot.”

Two years later, I would graduate nursing school, marry, and begin a family. To this day, it was one of the greatest experiences of my life and left memories that still bring a smile to my face. At seventeen, I looked fear in the face and I kicked.

“Faith is believing that one of two things will happen. That there will be something solid for you to stand on or that you will be taught to fly.” Unknown

18 thoughts on “Look Fear in the Face and Kick”