Another guest-post by K. Alan Leitch. Please visit my blog for tips that have helped me to write, and for samples of my fiction.

All this present tense in recent fiction really is making me tense. Perhaps it’s just because I’ve been reading since before it was popular—I’ve been accused of that during discussions—but I genuinely feel that more and more authors are writing using present tense for the wrong reasons. Present tense can seem more erudite, more literate and more immediate, but it carries with it a number of pitfalls that erode favorite novels like The Hunger Games without us even noticing. They pull off the improbable feat of a heroine narrating in detail while being chased by poisonous wasps and fireballs, and they give their narrators the super-power of predicting the future. 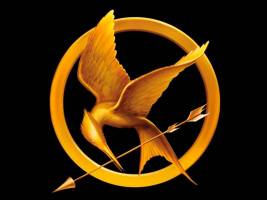 Is there a Mockingjay helping Katniss make notes?

Tortured Katniss Everdeen, sought-after by receding hunks for her very belligerence, pulls off double-duty by dodging assassins in a hostile forest, all while taking the time to carefully describe every sight, smell, and anguished emotion that occurs to her. When you think about it, this is quite a feat: for an archer whose only targets were rats, prior to her fight-to-the-death in a dystopian arena, her aim remains surprisingly true while she is nattering away every detail of the life and death around her. Of course, as a reader, I could choose to suspend my disbelief and just assume I am reading her thoughts, but the muscle in my brain that suspends disbelief is already too busy believing that twelve districts will be pitted against one another for the entertainment of Utopian overlords. In other words, I want to focus on the highly imaginative elements of this fictional world, not cringe over every faux pas that its narrator commits. And Katniss commits many, such as…

Most good novels make use of techniques that help readers link the plot together. Sometimes, we are helped along through foreshadowing, while at others the narrator directly lets slip some tidbits from the characters’ future. Harper Lee’s masterpiece, To Kill A Mockingbird, brings to mind a mature, adult Jean-Louise Finch sitting at her desk, penning (perhaps using an inkwell) her adventures as innocent little Scout. Every so often, though, she tells us what she knows now, not just what she knew then. Of course, Mockingbird was written in the days when past tense was virtually an author’s only choice; The Hunger Games, to follow a trend, chooses to use present tense, but still lets these tidbits slip. It is as if Katniss has the additional power of predicting her own future; she knows in advance what behaviors the Gamemakers will reward, and how her initial ill-will toward her fellow sook, Peeta, will morph into the bond between them. Collins is not even particularly subtle about this,writing narrative with the word ‘will,’ willy-nilly, throughout the entire trilogy. Katniss knows, a little too often, what ‘will’ happen to her.

Of course, present tense is an effective tool, when used very carefully. One of the first novelists to make regular use of it was the great John Updike; his Rabbit series, by purposefully eliminating all sense of foreshadowing, truly gives readers a sense that they are living a starkly real life alongside the protagonist. Furthermore, occasional use of present tense can stand out, from a novel largely written in past tense, as being either highly emotive to the narrator, or part of a tapestry of a life ‘then’ being narrated ‘now.’

The problem, though, is when authors use it just to make their novels ‘sound better.’ I was pleased to see that I am not along in this opinion, with Philip Pullman expressing the view that, “If every sound you emit is a scream, a scream has no expressive value.”

Perhaps that is why so many present-tense novels make me want to scream; I just need to be heard over them.

5 thoughts on “The Present is Tense: 2 mistakes to avoid when writing in present tense.”