The eyes have it for me. They tell the story despite the external hints to the contrary. The clowns taught me this lesson many years ago when I attended the circus. I adored the clowns.

Laughter is good for the soul. I fell in love with the clowns and laughter and in those moments began a love affair with me and comedy. The clowns outrageously large, red feet,  afro hair, and red noses  kept the whole tent laughing. Of all the acts that evening, the clowns with their white faces, wide red lips  and the unusual marks around the eyes were the most memorable. I left believing what a fun-filled life they must lead.

When they stopped dancing and performing for us, one of them took an elaborate bow right in front of me.  When he raised his head,  our eyes met and I saw the truth behind the paint. Pain. I was too young at the time to understand.  Without a word, he stepped forward and handed me a fake flower, then turned away, waved to the crowd and was gone. 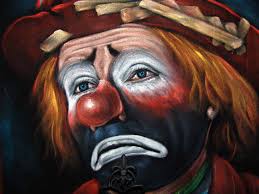 Afterwards, for many years I collected clowns. Dolls, figurines, and paintings. It was the eyes which  drew me. I longed to know their story, to figure out what it was I had seen in the eyes of the clown at the circus. If only they could talk.

Then I found comedians and boy did they talk. They kept me laughing as long as I listened.  Gradually, I packed the clowns away and turned on Pandora tuning into my favorite comedy channel.  I’d listen or watch the comedians with the same delight as I’d watched the clowns. “God, living with them must be a blast,” I’d think. They look so happy, so much fun.

Ah, but the eyes the have it, they tell the real story, the truth behind the mask. Once again,  I was dead wrong. The loss of one of the greatest comedians, Robin Williams made it clear. Finally I knew the answer. Pain. I had seen pain, the truth behind the painted face, the mask of comedy. Words covered as well as paint.

We all have our masks.

2 thoughts on “Happy Radars – The Eyes Have It”